Predator is the result of several months of work and is inspired by exotic supercars like for example Koenigsegg, Pagani, Bugatti and Gumpert. What most of those cars have in common is that they all have their unique character despite their clean and generic supercar look. The idea was to give Predator a similar identity, keeping things clean, but still give it a unique and clear supercar styling. But its uniqueness should not be limited to its looks alone; also what’s going on under the shell should give it a little extra, covering some innovative ideas.

– The heart of the car consists of a V8 engine;

– A vertical positioned gearbox is located right behind the engine and transfers its power directly to the rear wheels;

– the 6 different speeds (5+R) can be manually selected with the gearstick between the seats and has a one to one mechanical connection to the gearbox with some linkages;

– All wheels are suspended independently with double wishbones;

– The front wheels are steered through either steering wheel or HOG and include ackermann geometry;

– Front axle also has positive caster angle and kingpin inclination. Bump steer is minimized due to the low location of the steering rod;

– Gullwing doors which can be controlled from directly above the airintakes on the side and include a wormwheel configuration;

– Bonnet and engine cover can be opened as well, but this is done manually and they have a built-in limitation of their respective opening angle. They stay open due to friction. 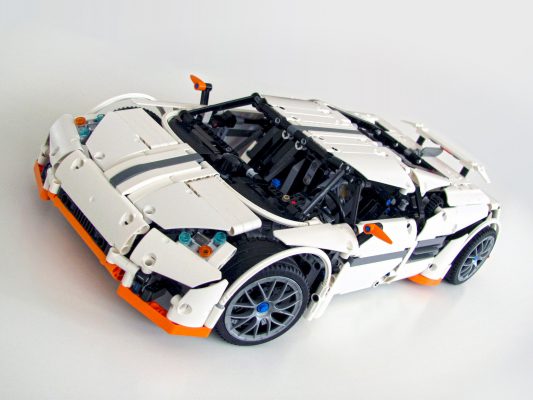 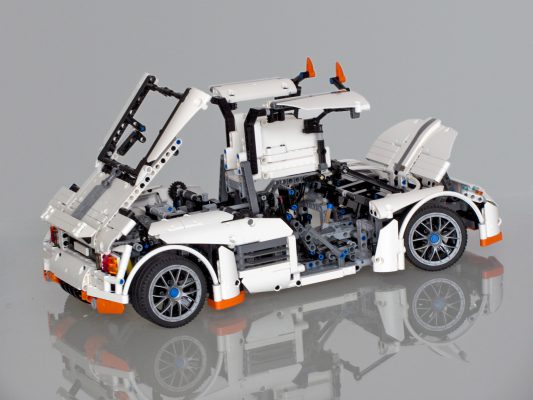 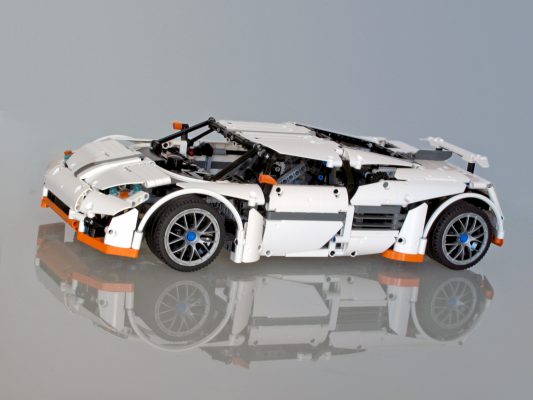 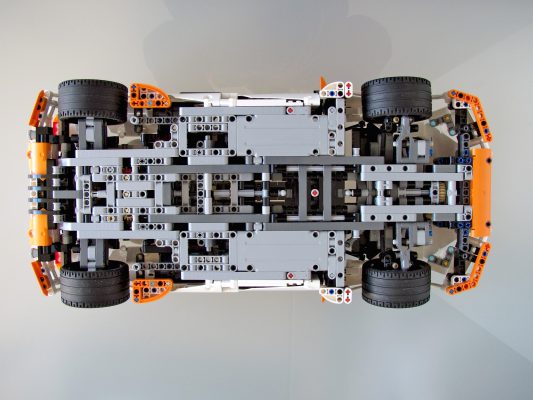 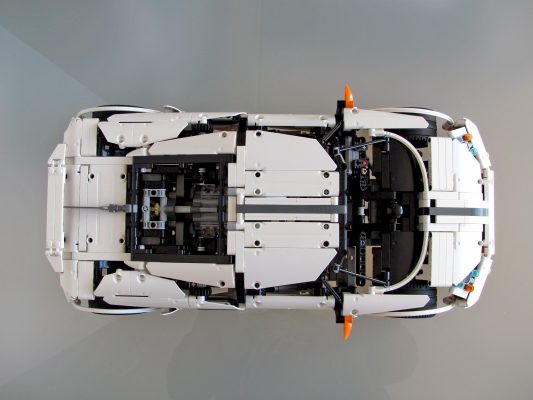 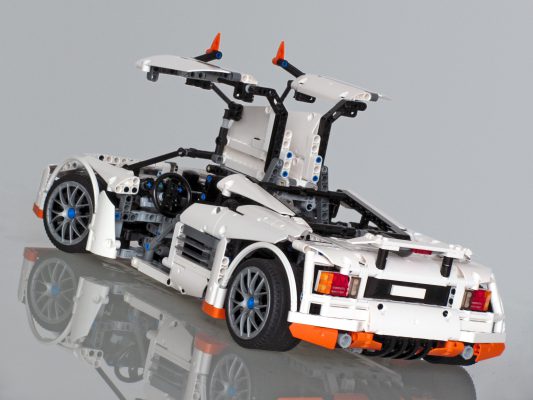 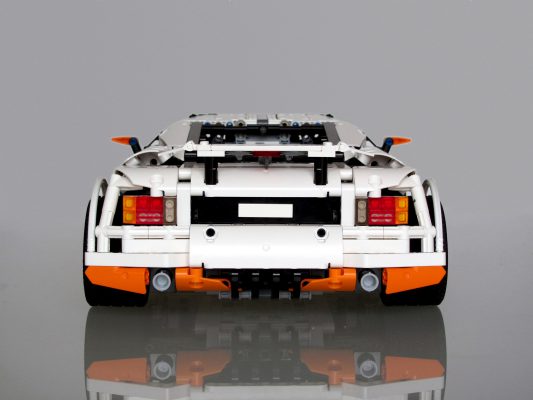 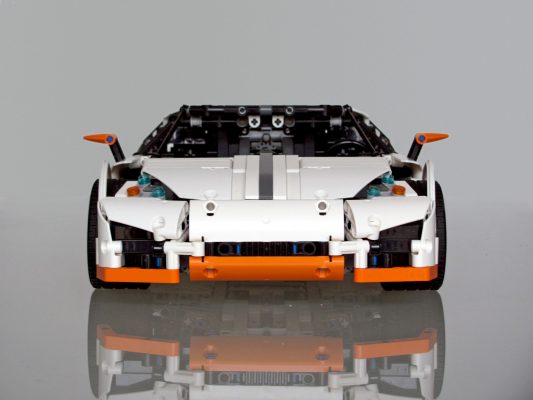 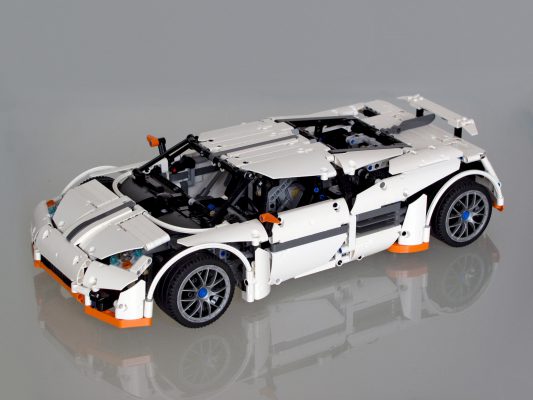 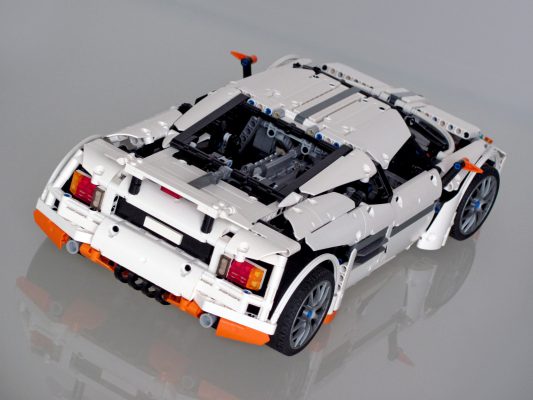 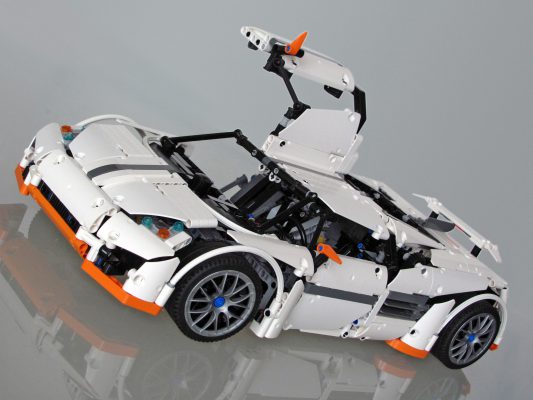 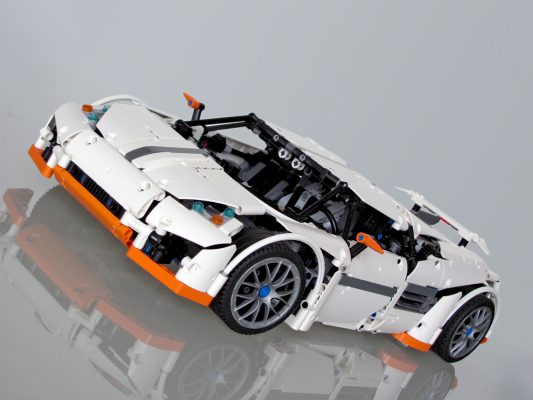 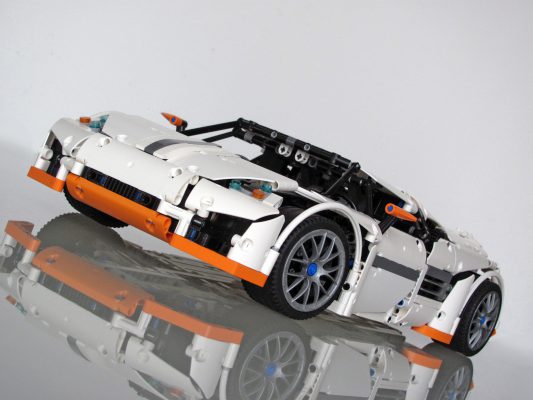 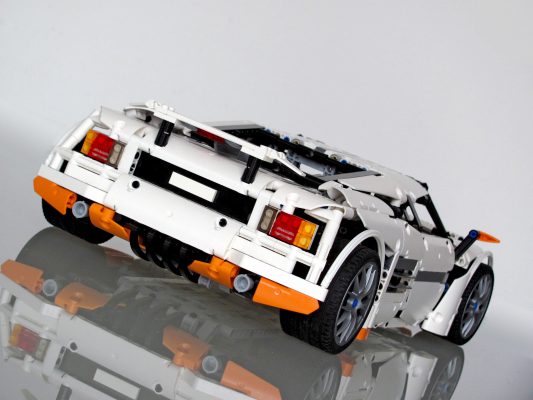 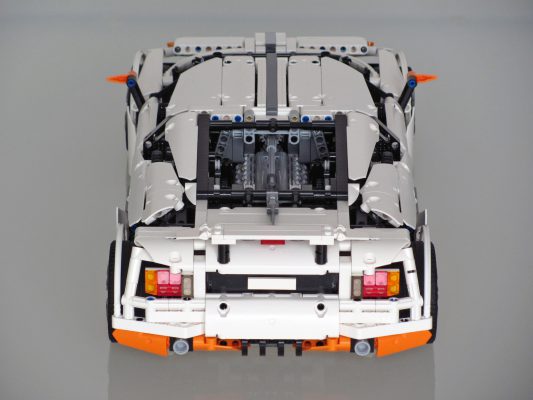 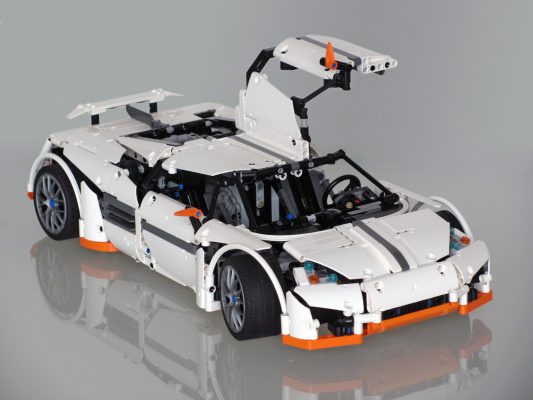 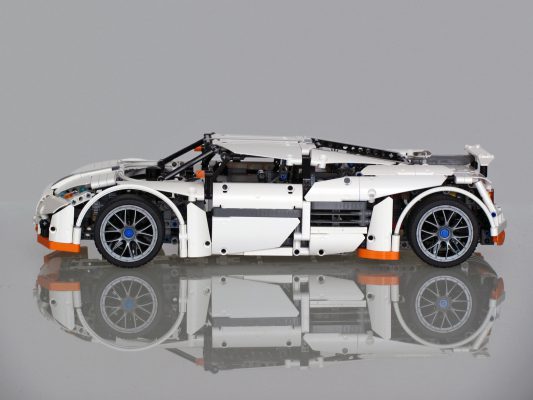 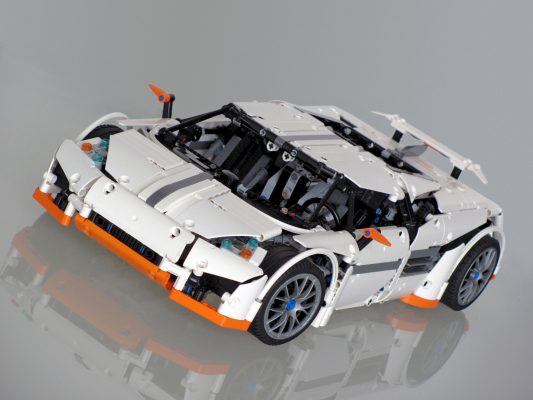 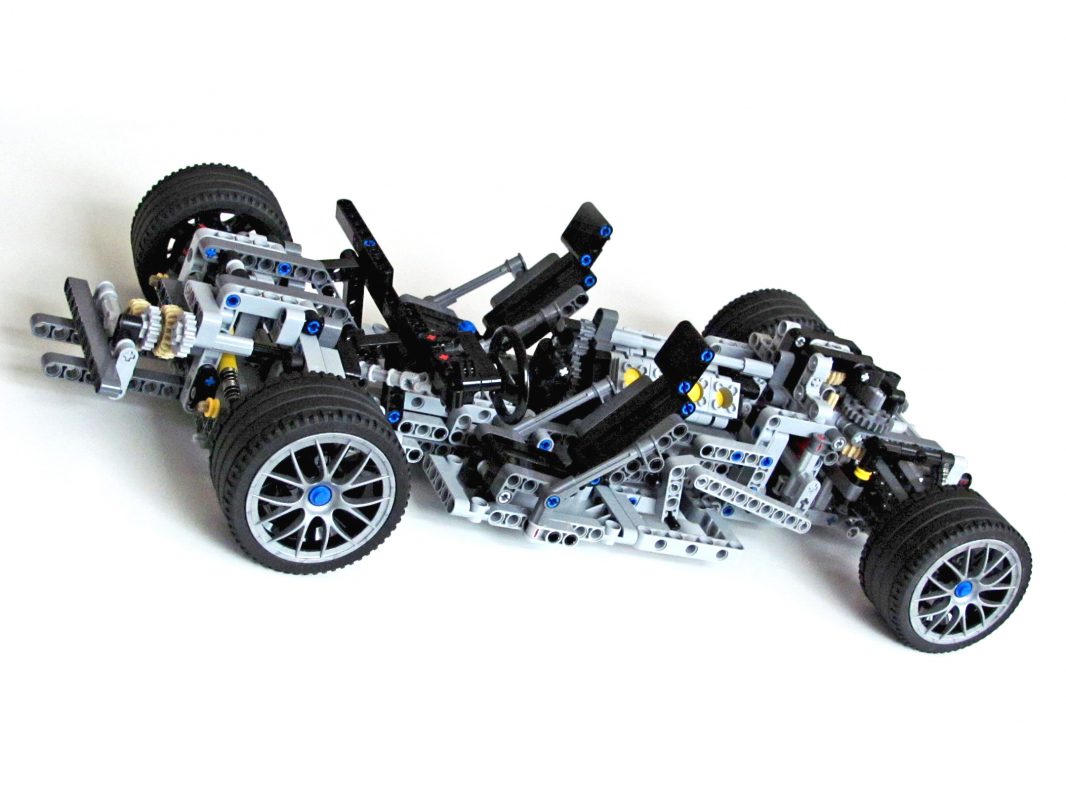 The whole idea for this model started with a gearbox located between the rearwheels and engine that can be controlled “remotely” with a gearstick from between the seats. Different than any other car I’ve seen so far, it had to be positioned vertical, not only to reduce the distance between engine and rearaxle, but also to be able to simplify the control with a more reliable, “fool proof” layout. The first working prototype ufortunately had play in the system due to the driving rings that made it difficult to get things to work properly. So when it was discovered that Technic was going to launch a new system in 2015 I had to investigate if it could be implemented in this model and if it would result in a better performing model. Luckily this was the case, although it required quite a redesign.

With this unique and innovative gearbox layout, I felt the need to do something a bit different with the frontaxle this time as well. It seems a trend to build more accurate front axle geometry these days, so the choice was made to try something similar and include caster and kingpin inclination, while still using the newer hub parts. The only disadvantage is that the wheel scrub is quite large with this configuration, which I took for granted.

Once the chassis with interior was done, it was time for the carrosserie. However before starting with this, I had to choose a door type; regular, scissor, gullwing, butterfly or something unusual. The decision was made to go for the gullwing doors, mainly because it fits well with a supercar plus that the space in front of the seats is very limited and it would likely be easier to design a mechanism behind the seats.

Another thing is that in most car mocs people either choose to replicate nice flowing lines or cover as much surface as possible considering aesthetics. The current trend seems to cover almost every nook and cranny of the bodywork with panels, bricks or any other piece that fits the open space, so it made only sense to try to do something similar. The problem here is that most models turn out looking kind of cluttered and messy, instead of nice and clean, so the challenge was to avoid this and try to keep nice flowing lines. If that wasn’t enough, this was also the first time that beside combining surface coverage and lines in a nice way, I considered light and reflection, something that is especially necessary when working in a light color like white which highlights any imperfection immediately. After I had a concept for the doors and a rough sketch model for the overall looks, I worked my way from front to back, finetuning every bit of the car. The last bit was the rear end with the taillights. 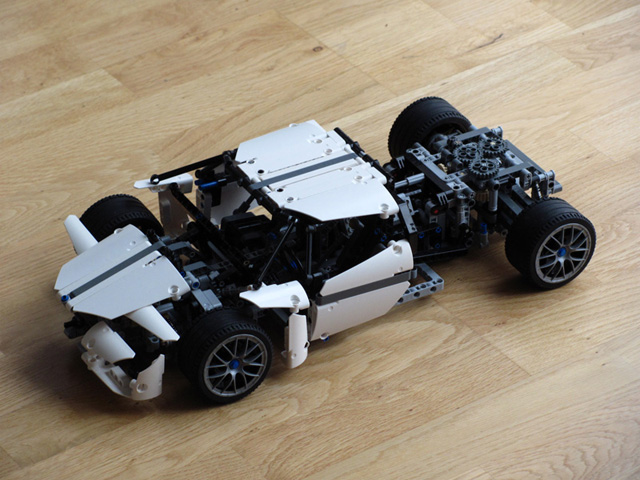 This model gave me more headaches than any other model I have designed so far, because of the amount of complications and challenges during the process. That’s what you get when exploring new and unknown territory; you never know in advance if something will work or not, but that’s exactly what makes things interesting for me.

The first challenge was a gearbox design with “remote” control that is reliable and fool proof, without the need for tinkering around and finetuning. To keep everything compact with the engine low like in a real supercar was something else that took a few redesigns and configurations, shaving of one module at the time. I made a big leap when realising that the differential could be driven in a vertical position as well, so the “only” 90 degree angle necessary left to make was between the gearbox and engine. Pleased with a strong solution, the whole construction was challenged once again when changing to the new driving rings which are one module bigger. And believe me, just one module difference can have a major impact on a design!

Surprisingly though the biggest challenge was not the gearbox but the front axle. First it was too long and too high at the front for the aesthetics that I had planned. On top of that the suspension was too soft, but stiffening it meant that this whole module had to be made stronger. Making something smaller and at the same time stronger required some extensive redesigns. Repositioning the springs was not an option either because it would both be too high and conflict with the steering mechanism. Speaking of which, the steering needed gearing down and should be controlled through either steering wheel or HOG. So there is a lot going on in a small space. The steering with caster and large scrub made things only more difficult. Every time I thought I had solved one issue, another popped up. I lost count with the amount of redesigns either big or small, but it’s probably somewhere around 10. In many cases I had 3 at the time to work with, trying different concepts and combining the most promising solutions. It was all in the details. 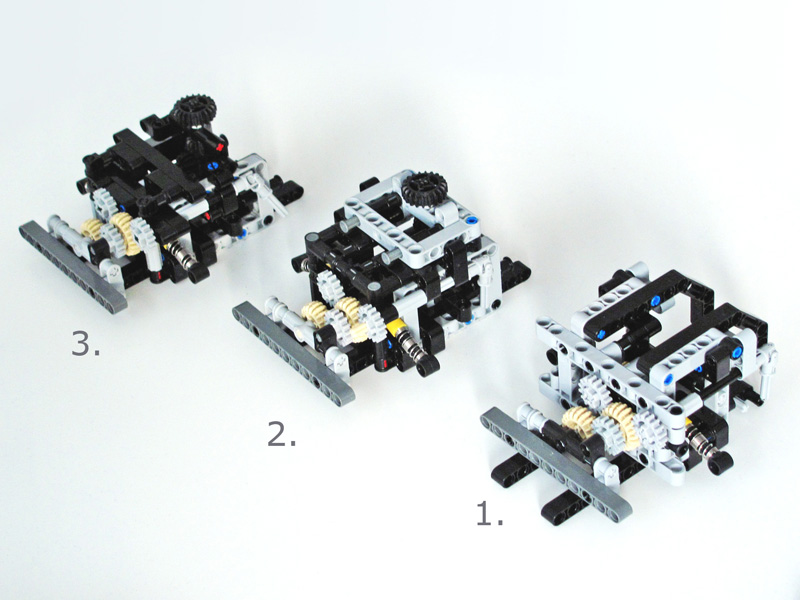 Designing the roof caused a lot of trouble as well. With the engine positioned a bit too far to the front the roof supports had to be built around it, which was easier said than done. The A-pillars at the front didn’t give any structural support either with their balljoints, neither the engine cover that was planned to open the other way around. On top of that the gullwing doors’ hingepoint is located very close to the center of the car, leaving very little space to build a strong roof. So without any support at the front, the spine had to come from the center from behind the seats, but go around the engine. With the seats almost touching the roof as well, there was very little space left to built something solid, also considering the doors opening movement. Still I wanted the roof to be so strong that it would be safe to carry the whole weight of the car through it, both in compression and tension form. After many trials and errors, when there was always something interfering when opening and closing the doors, I finally got a clean movement for them and with a strong structure for the roof! 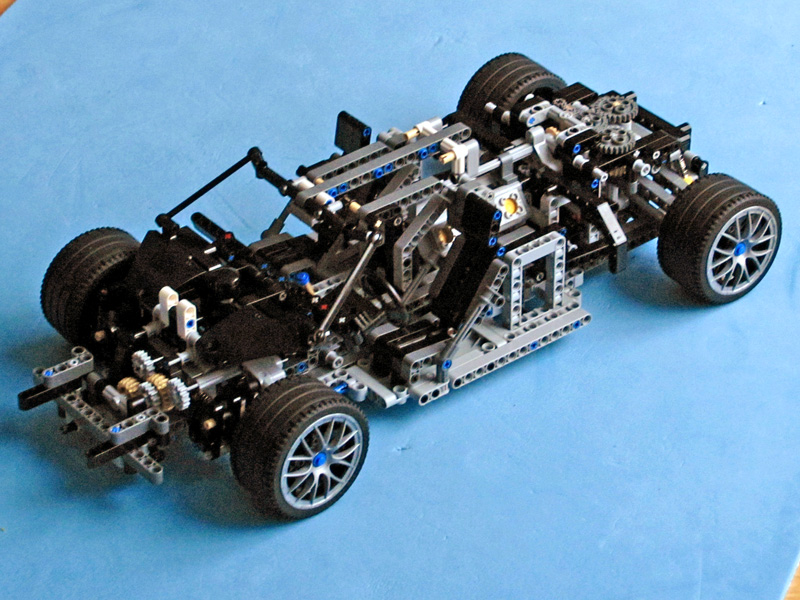 From an aesthetic point of view the part that took most effort to get right was the space between the door and around the rear wheel. I think I have tried pretty much any panel combination there is, but non of them resulted in a satisfying visual appeal. That is until this final solution came up, but it took ages to get to this. It might not be perfect, but in my opinion it has a good curvature flow, looks clean, and fits well with the rest of the car, keeping things nicely in balance.

It seems like everytime I start a new big Technic project, the concepts I come up and want to try executing are always causing me major headaches to solve. Sometimes I fail miserably, most of the times I have to make some big compromises so that the model only lives half up to what was intended, and rarely am I actually very pleased with the result that it surpasses my expectations. This is one of those rare occasions. Is it flawless? Most certainly not! But imho this is one of my finest models created. The only disadvantage is that I have no clue at the moment what I can try to improve next time. It will probably take a while before I will undertake another big project, so do not expect any other new Technic creation anytime soon.

Want to build your own copy of the Predator? After several weeks of hard works the building instructions including a full parts list are now ready and available through Rebrickable.

They are made in a similar spirit as official instructions and due to the amount of work involved, a small compensation to get access to them is asked of €12,50.

Comprehensive reviews of this model by several independent persons at Rebrickable, Eurobricks and Techlug (translated).

Most of the parts should be quite common and easy to obtain. If however the wheelcovers are too much of a problem for you to get hold of, I’d suggest the following alternative: 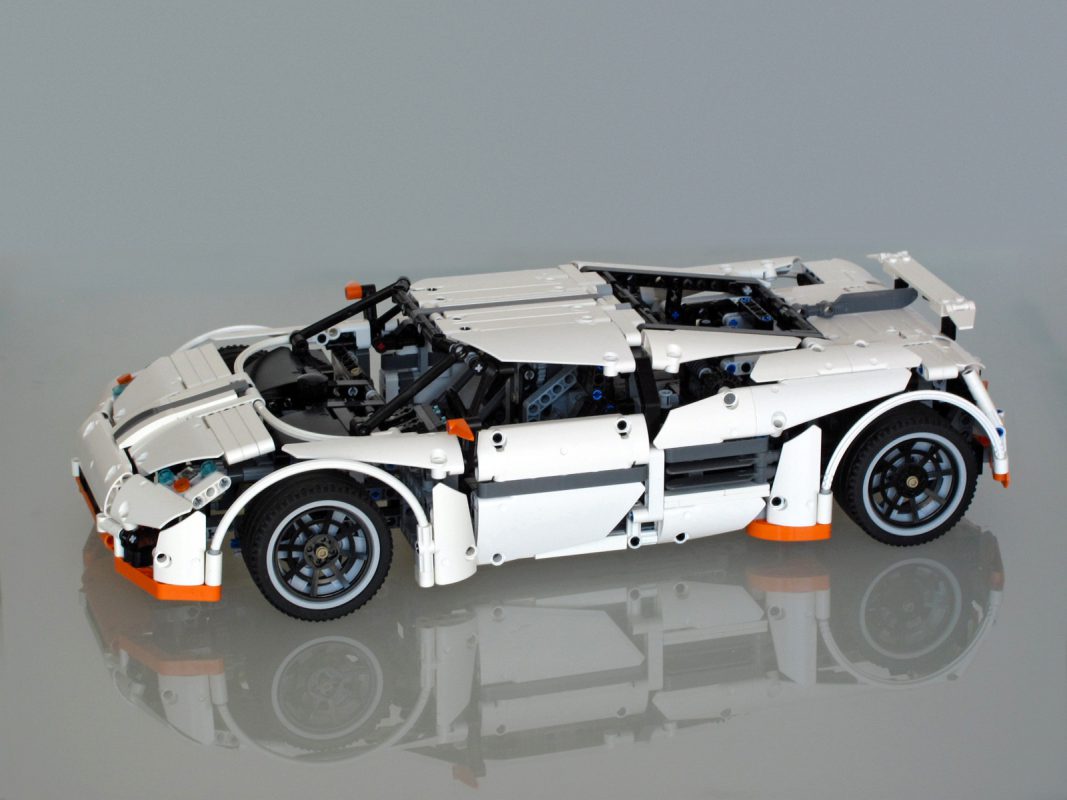 The only difference is that instead of black wheels, I used light bluish grey, and for the wheelcovers I used black radar dishes (4285b). 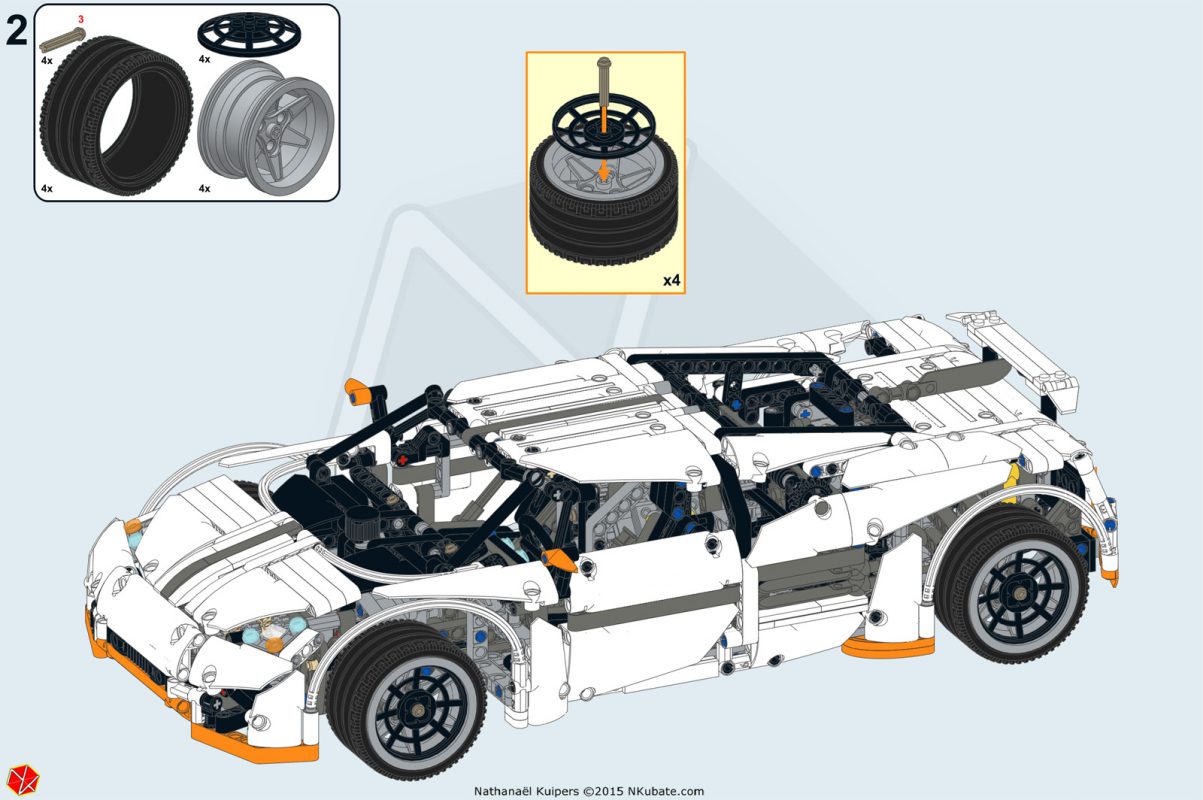