A fully posable adult Link figurine from the Legend of Zelda: Ocarina of Time.

I’ve always liked Nintendo videogames and for a while now wanted to render one of their renowned characters in bricks as a tribute. The initial thought was to make a figure with a fully posable body. This meant many articulation joints, but this also required a well balanced build that is both strong and stable. On the other hand it needed to be light and rich in detail, so the character is easily recognizable and can be shown as a display model. This is a tough compromise to make. The choice fell on Link from the Legend of Zelda: Ocarina of Time (LOZ:OOT) which is considered by many as one of the finest videogames of all time. Having seen some other non-minifig Link figures built in LEGO, this had to become the most iconic, authentic, detailed, and posable version. And ofcourse as a purist, everything had to be brick built, without using stickers or meta pieces. 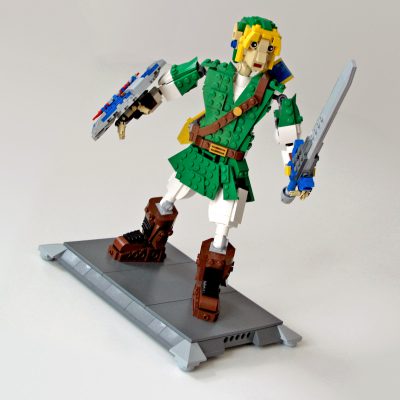 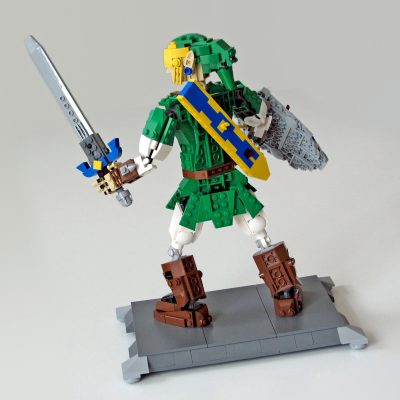 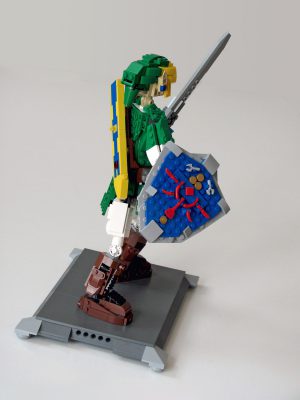 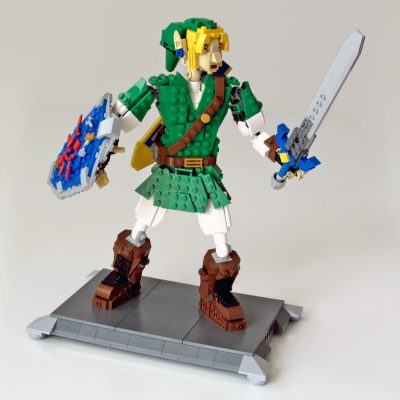 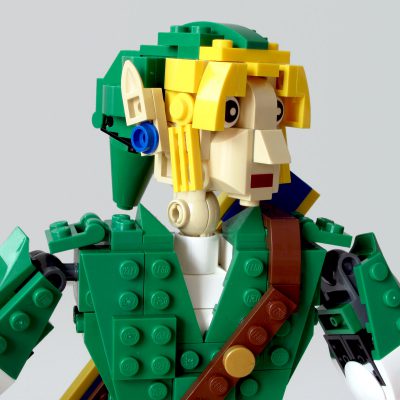 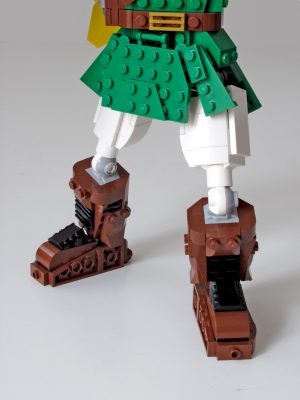 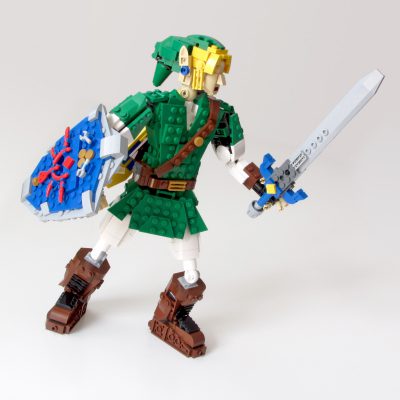 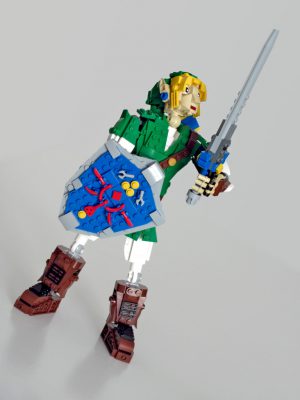 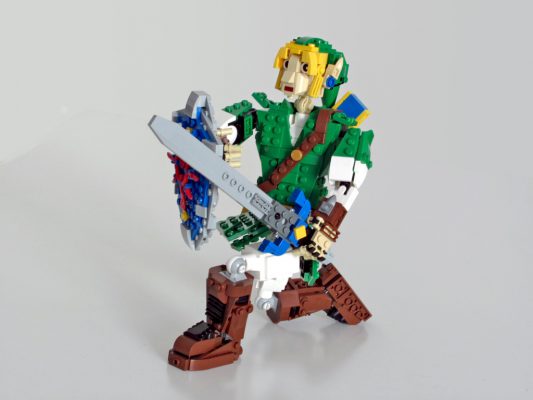 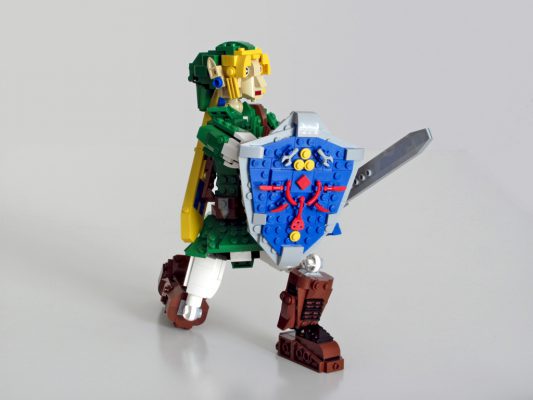 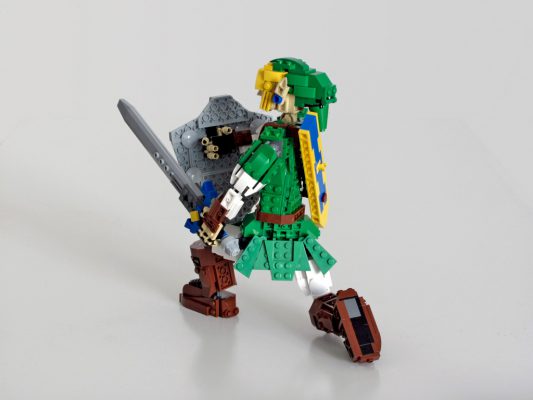 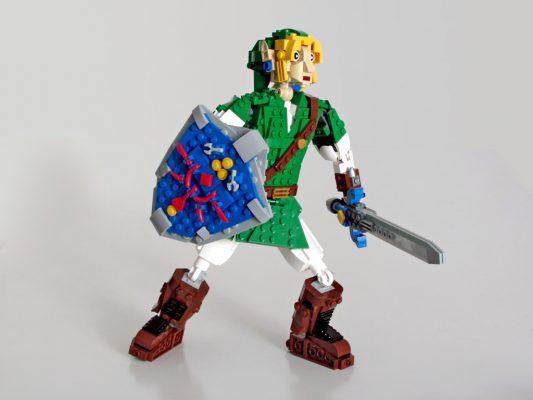 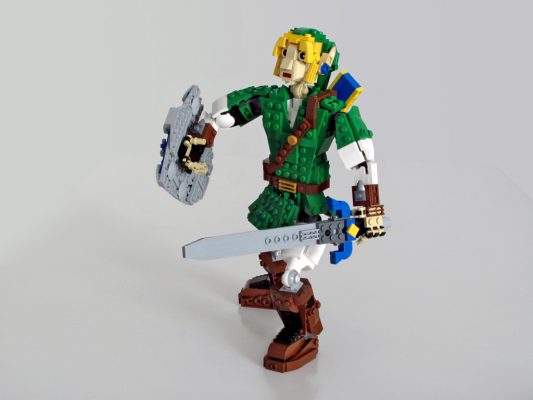 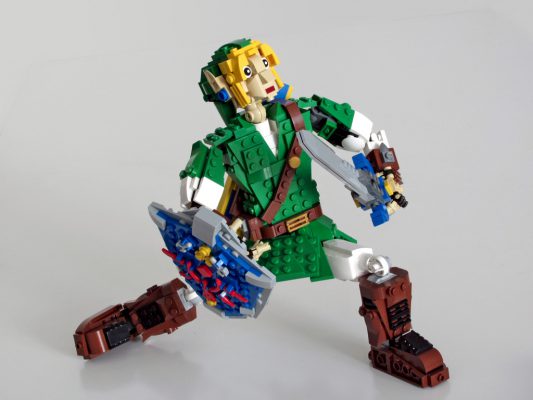 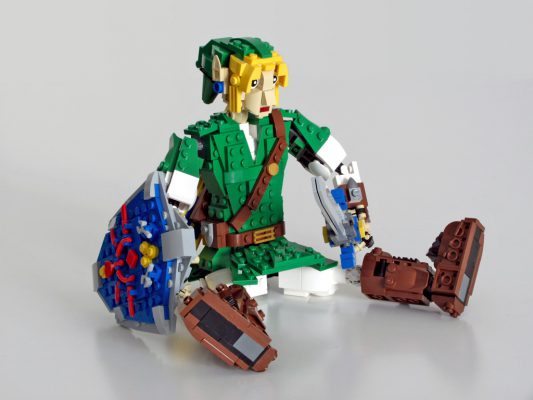 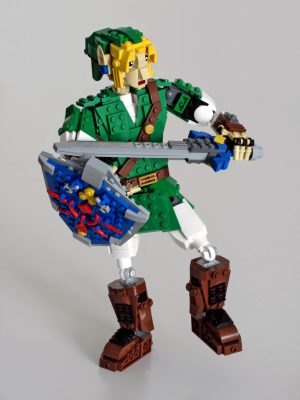 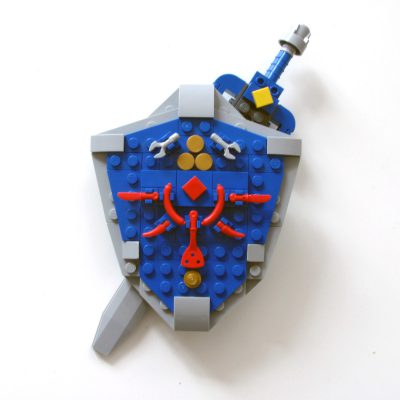 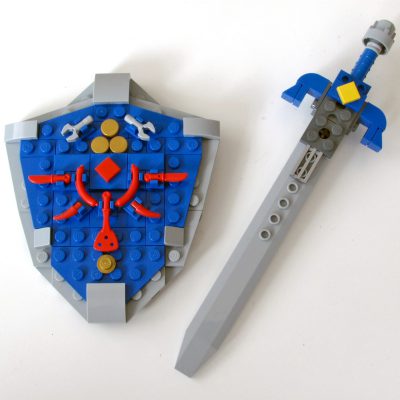 The first stage was to create a strong skeletal framework with the right proportions and articulation points. In the end I managed to include 14 different joints: ankles, knees, hips, waist, shoulders, elbows, wrists and neck. The result was a highly posable stickman. To keep things light, but create volume a technic 6×4 frame was used as the base for the body.

After this, the body was dressed up roughly to get a feeling for the overall proportions. Now that the scale was set it was time to give this figurine an identity and create a head with some facial expression. This was a real challenge, because the head can not be disproportionate but still needed to be rich in detail to somewhat represent Link’s characteristics. Eventually a lot of SNOT (Studs not on top) and some SNIR (Studs not in row) techniques were combined to get the result I was looking for. Still I managed to create multiple crossconnections for the required sturdiness.

Since the model started to get some character, I thought it was a good moment to shape some of Link’s legendary attributes; the Master Sword and the Hylian Shield. Now there was a proof of concept, knowing that what I was aiming for could be achieved. However at this point it also became clear that I neither had enough special shaped elements in green and brown nor a lot of very small parts to create the level of detail I was aiming for. So for a change I made some larger orders through Bricklink. 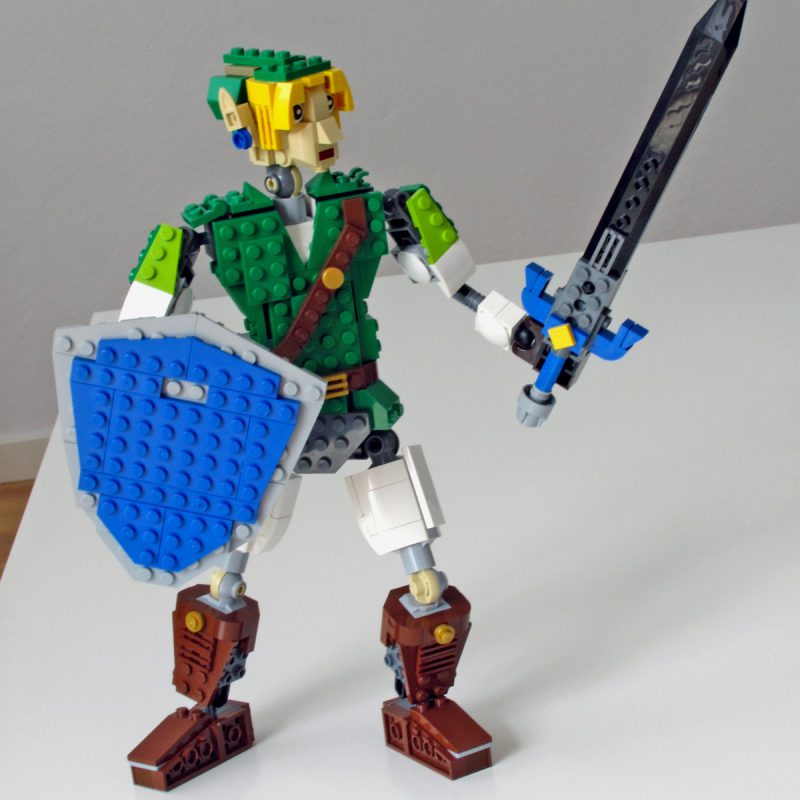 While waiting for the parts, I spent some time on the sword’s sheath. Initially I looked inte the possibility to actually design a functional one, but came to the conclusion that it was too bulky, rough and weak to fit in. So instead I opted for one that was aethetically pleasing to the eye. Some more time was spent on the shield as well, figuring out how I could design the detaling. Once the new parts started to drop in the real sculpting began. The boots were beefed up and some detail was added. The whole arm sections were redesigned with the exception of the joints for shoulder and elbow. In particular the lower part went through a complete overhaul, to make it slimmer and more detailed. But because again I did not have certain elements in the colour I wanted, one final order was made which also included some red minifig accessories which were planned for detailing the Hylian shield even further.

This shield was another interesting exercise figuring out how to capture the essence without making an exact replica, because that would result in something too heavy, bulky and cluttered. Pleased with the result I finished the model with Link’s pointy cap and the skirt of his tunic. On purpose I decided not to smooth his cloths with a bunch of tiles to keep the rugged, textured feeling.

At the moment there are still a few small details I’d like to change, in particular some parts in certain colours, but those are minor things and not so easy to get hold of, so for the moment this should do. (Part sponsors are welcome to contact me. :P)

At the start of this project the question was if Link’s horse Epona should be included in a similar fashion at the same scale, but in hindsight this would have been a challenge on a completely different level of difficulty. And for now my collection of brown parts is also highly insufficient to even attempt this. So instead a simple stand was added to give it this display feeling. Who knows, it might even be a good fit with some of the models from the Ultimate Collerctors Series (UCS)…