The request was to review the new 10262 Aston DB5 Bond edition. However because Brixtar was all about re-using the bricks you have, the request was if I could build an alternative model and from this point of view review the model through an interview. In here I expressed my first impressions on the DB5, but in particular the content of the set.  Unfortunately, with the limited time available, there was no opportunity to build the ofiicial model itself first, but instead after the unboxing process the work immediately began on the alternative model.

Probably the most interesting aspect to talk about is how I tend to approach a task of designing a bigger alternate like this. Included a part from the interview:

“The first stage … is about exploration. In this phase you explore different directions/ options and try to get a feeling for what type of ideas might be feasible.
Then once I have settled on a specific type of idea (in this case truck) I create a framework, a very rough structure on where I want specific elements to be for the overall proportions. This I consider the planning phase. At this stage the main structure takes shape, but at the same time many parts of the model are fragile where elements are sometimes connected with just one stud. Concretely this means that I work with the bigger structural parts like plates and Technic frames, together with some of the limited number of big shape elements in a set to plan their location.
The next step is to give the model some character and here specific features are filled in. One of the main areas of attention is the front face. During this part of the process, many of the main surfaces start to take further shape with here and there some more detailed sections. Structurally the model has still some weak points, but many sections are now quite solid. At this point the exact proportions are also defined, so to make certain that the considered model can be achieved.

However not all surfaces are completely filled in yet. So now the patch work starts in which I need to fill in all the gaps. At this point I usually slowly run out of certain parts, so I need to carefully evaluate whether a part is necessary to have somewhere or if it can be replaced somehow. Here I need to validate where each part is worth most. Therefore this is often the period that I start to redesign certain sections to make them stronger and more part efficient at the same time. The part swapping and replacing process pretty much is an ongoing business from this point onwards. I would refer to this as the detail design phase.
Last but not least is the final optimization in which every aspect of the model is reviewed and finalized. From the outside many changes are not notable anymore because most happens on the inside. This stage also includes interior details, engine block and other internal changes. All gaps that are left on the inside will now be filled if possible, to further optimize the structure and performance of the model. Once this is done the alternative model is considered ready and the parts that are left over are examined one final time if something of interest could be added to the model.”

Here are some pictures taken during the process which demonstrate the different design phases. 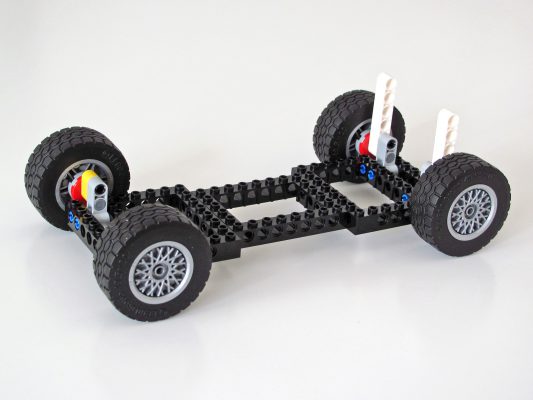 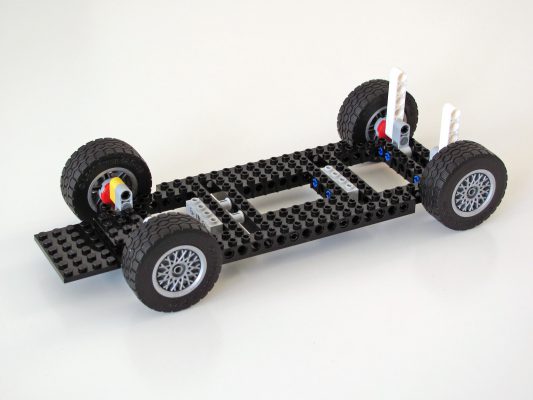 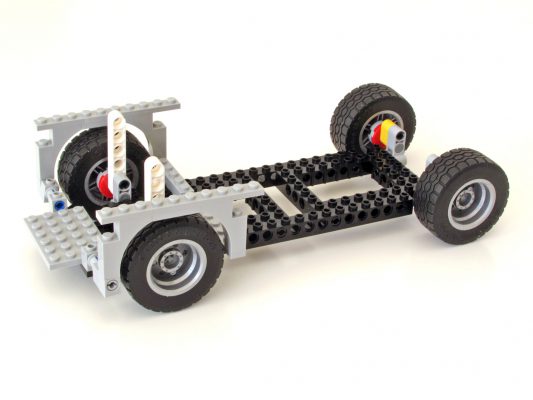 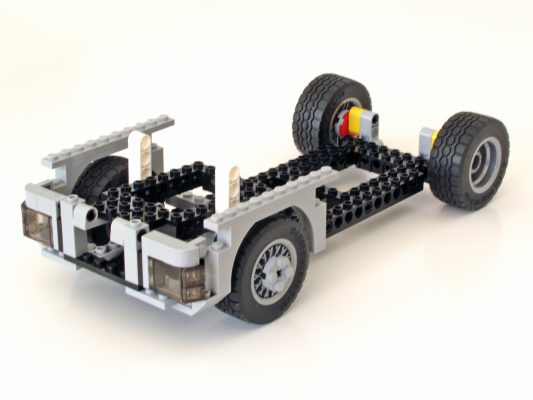 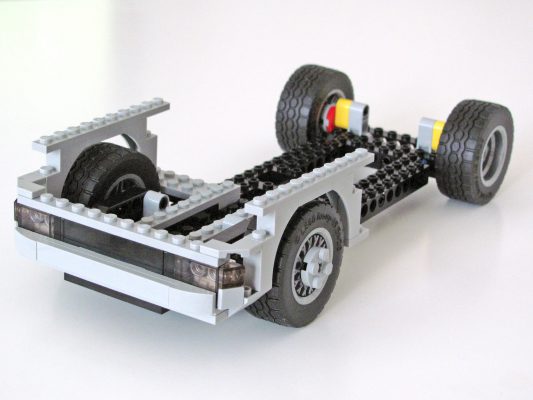 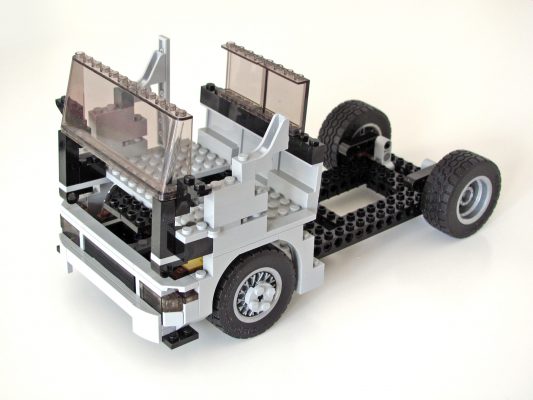 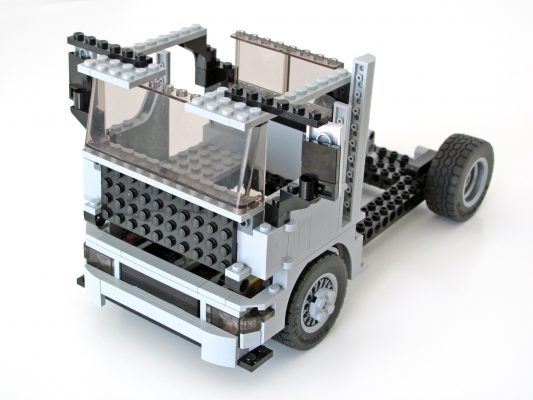 filling in the biggest gaps 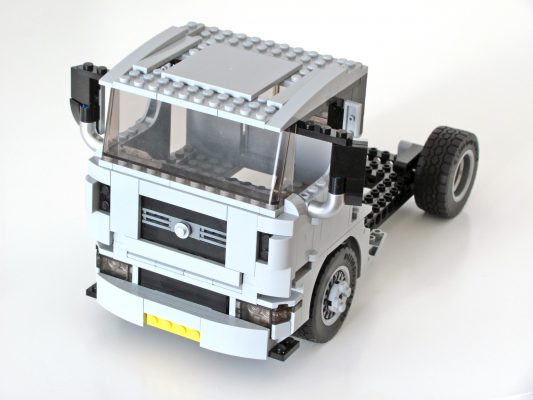 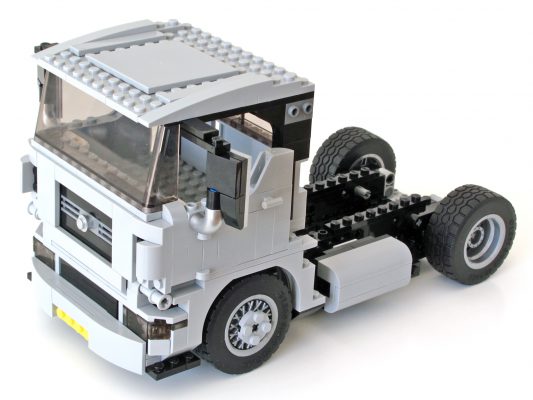 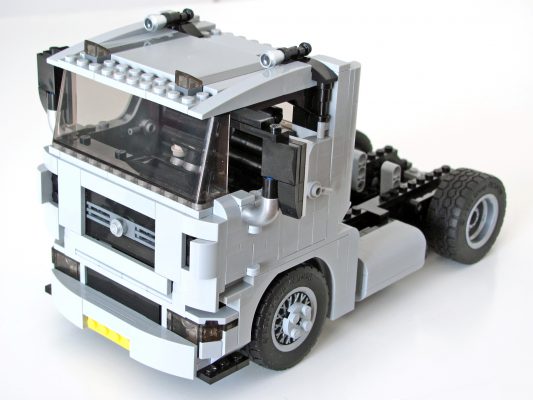 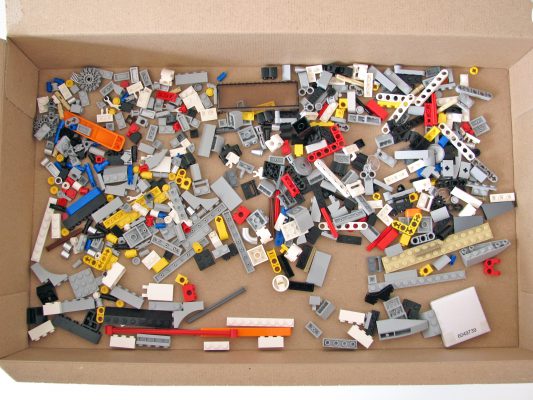 Pictures 1 – 3: Exploration to decide what type of model.

Pictures 3 – 6: Planning where certain key elements should be located.

Pictures 7 – 9: Giving the model its character

Pictures 10, 11: Detail design and optimization. Changes become less notable when this stage progresses and it becomes more about adding further details and finetuning. It needs to be said that the whole process is highly iterative, meaning that you go back and forward between different stages as you progress. After many iterations, the result could look like this. 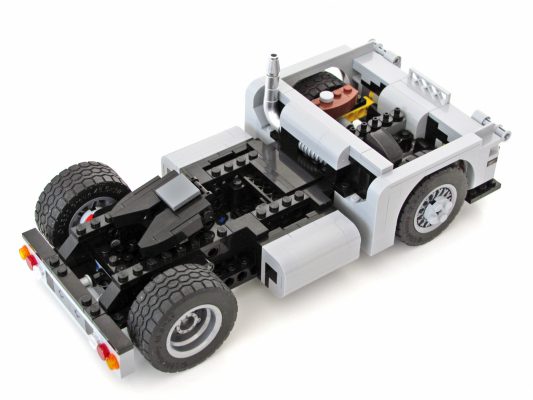 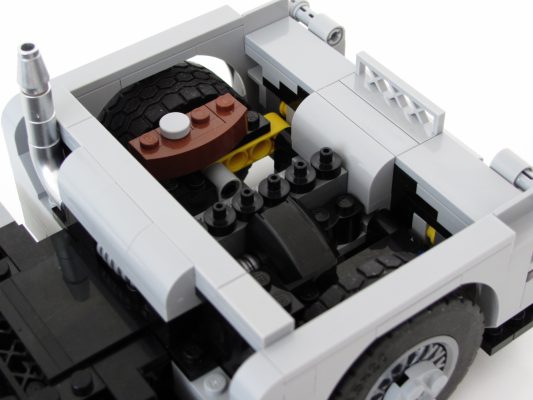 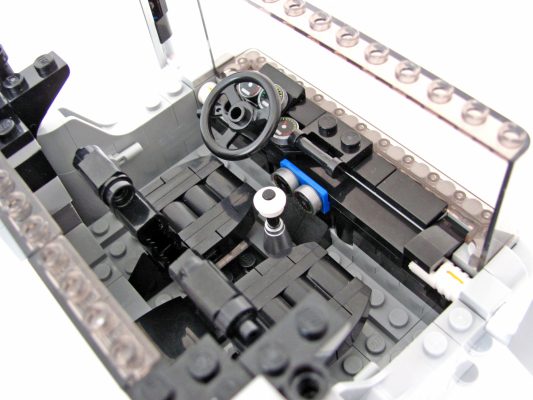 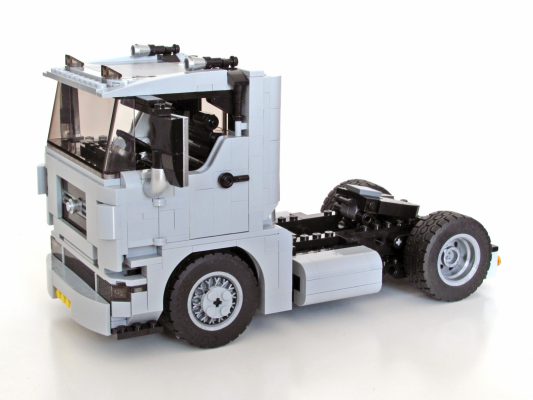 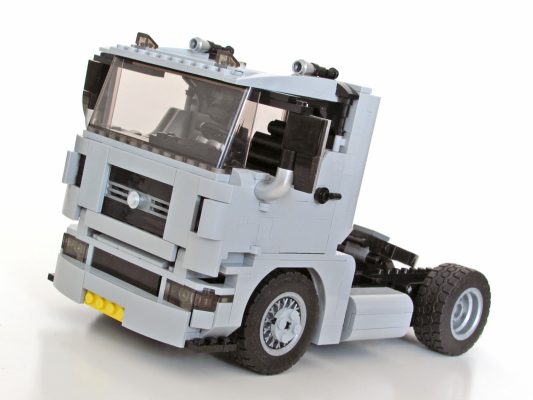 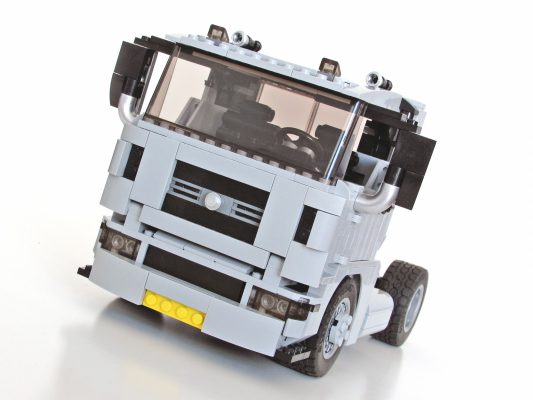 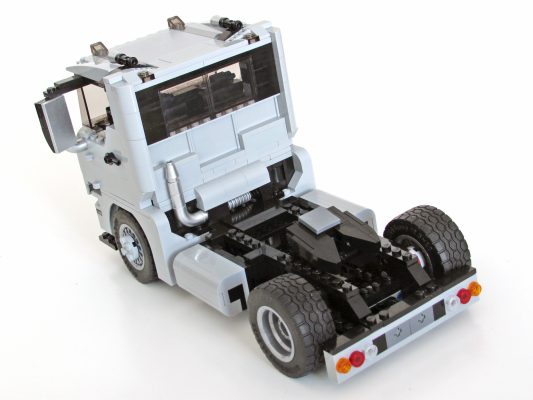 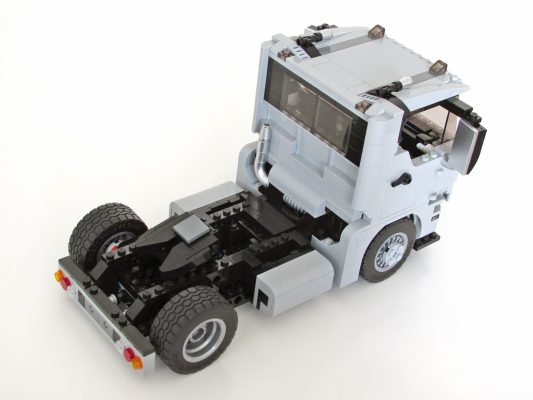 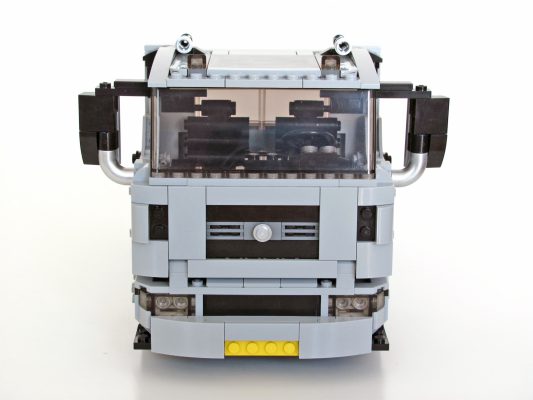 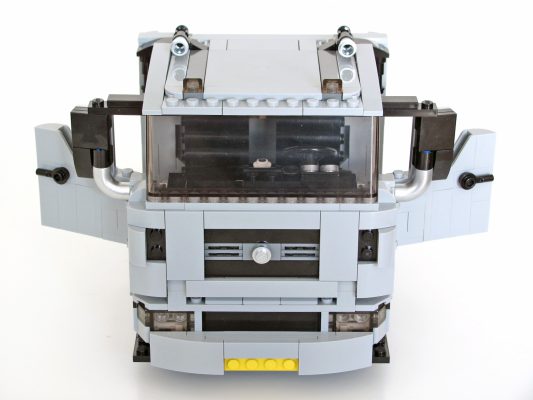 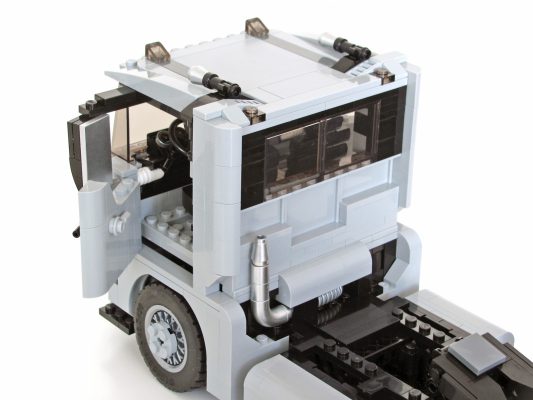 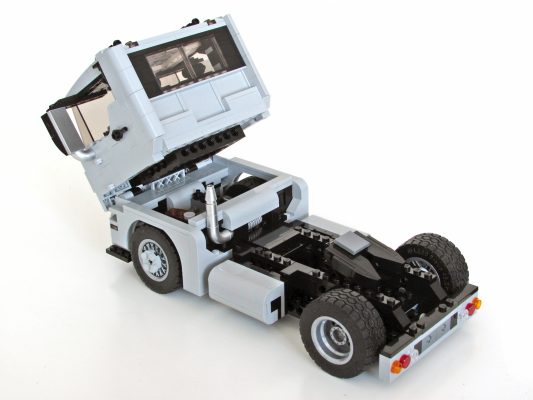 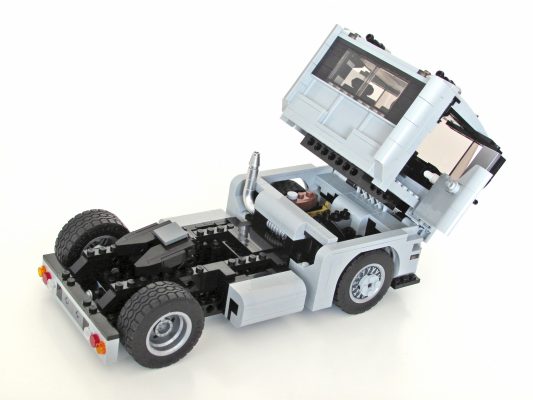 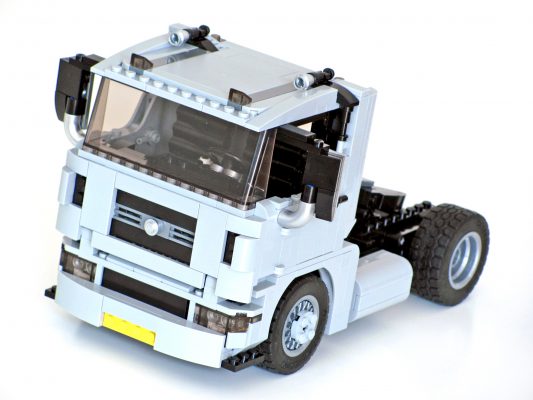 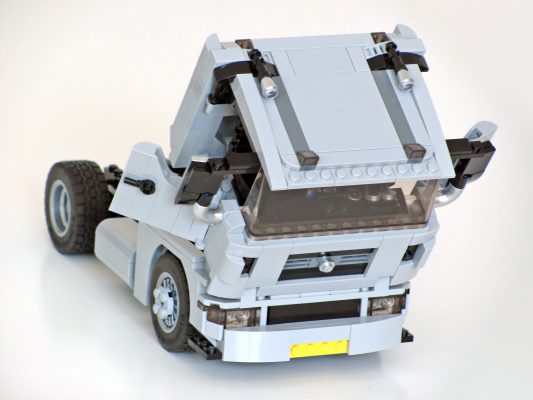 Although this alternative has no gadgets like the official model, I wanted to include the most common features, like tilting cabin and opening doors. Including functions always adds an interesting challenge, especially when it comes to their construction and smooth integration using only the limited material available. Of all the big Creator Expert car models that I turned into something else, this is probably my favourite alternate.

Detailed Building Instructions are available at Rebrickable for a small fee (Link). One thought on “Big Rig”